The first week of May featured a slew of MOTU Classics news: New packaging reveals, new bios released with some interesting tidbits of the He-mythos, and accessory spotlight videos from Toy Guru. We watched it all with interest, but it was Nekron Week, darn it! That’s all done, so let’s recap.

We didn’t learn much new from the video, but it was cool to see some of Vykron’s pieces in action. While we were doing Nekron Week, I wanted to post some of my thoughts on Vykron, but I was just too busy. I am happy with the selection – the SDCC exclusive is the one figure that will never be in the subscription and that makes it a perfect home for a “divisive” figure like Vykron, not that that was Mattel’s intent. I have some minor nitpicks with him, like his chalice/helmet on the Barbarian look or that they all have to sport the standard loincloth, but overall I think he’s going to be fun. I will probably customize him even further, into three unique characters, but Mattel got the figure off to a good start. I didn’t think the bio would be terribly interesting, but Mattel surprised me there!

We got our first look at the bio courtesy of the gang at AFi who headed down to the ComicBug to check out Mattel’s SDCC display. Click here to check out the pics!

Vykron – Ultimate Eternian Champion, Real Name: Vykron
Fifty years before Prince Adam was born, Vykron the Warrior fought in the gladiatorial arena of Lord Choloh, ruler of the Vine Jungle. Learning from each defeated opponent, he became a master of many combat techniques and weapons. As much a champion as a showman, he would often dress in outlandish garb to rouse the crowd and show off his skills. In his final match, he fought against the great Gygor. Before a cheering crowd, the evil fighting gorilla ripped Vykron body in half, at long last defeating the arena champion. Following this match, Gygor claimed not only the arena championship but rule of the Jungle itself, forcing Choloh to abdicate his throne. In life, Vykron was the greatest of Choloh’s gladiatorial warriors, fighting in any environment at any time.

They surprised me there. I think an overly theatrical gladiator is a bit funnier than Mattel intended, but then they went and ripped him in half to bring it home. Ouch. 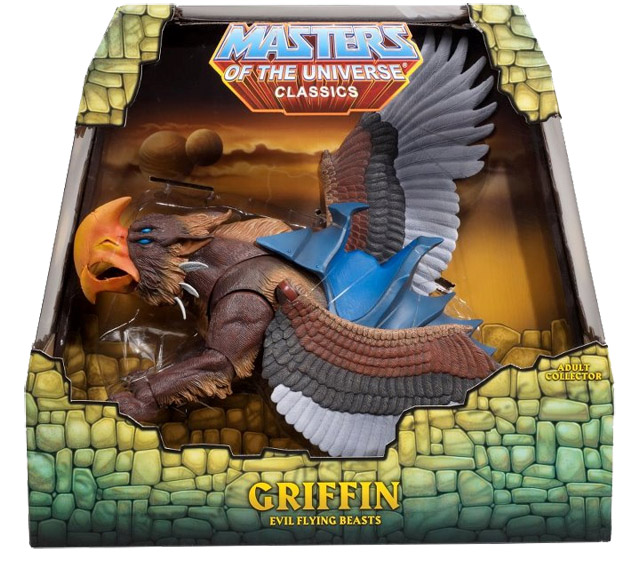 Griffin – Evil Flying Beasts, Real Name: Varies
Griffins, great flying beasts originally brought to Eternia by Star Merchants, broke free and lived in a wild colony deep in the Vine Jungle. Here they were once again enslaved, becoming the steed of choice for the savage Beast Men living in their treetop villages. Raqquill Rqazz, a Beast Man serving Skeletor from Snake Mountain often calls upon several Griffins to carry him and his master into battle. During the Second Ultimate Battleground, several hundred Griffins were commanded to attack Grayskull Tower, hoping to weaken the Master’s defense perimeter. Soaring high above Eternia, Griffins bring terror to those below! . 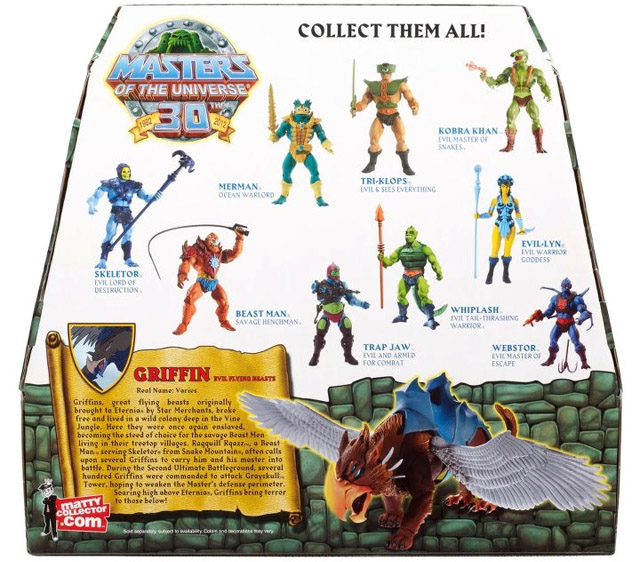 The Griffin bio is just a straightforward example of a good bio. It’s interesting that they’re not indigenous to Eternia and that we get another mention of the Vine Jungle so quickly. I suppose it wouldn’t be out there to think that Vykron battled a Griffin in the arena? Continue to Page 2…