With the packaged figures at San Diego, Powercon, and New York Comic Con giving us so many of the MOTU Classics Biographies, it feels like forever since we’ve done one of these articles on a Mattel Facebook reveal. Today, we got our first look at bios for Draego-Man & Kobra Khan. 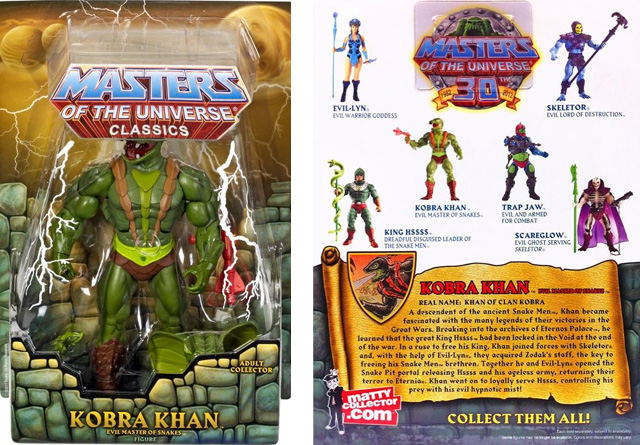 Kobra Khan – Evil Master of Snakes, Real Name: Khan of Clan Kobra
A descendant of the ancient Snake Men, Khan became fascinated with the many legends of their victories in the Great Wars. Breaking into the archives of Eternos Palace, he learned that the great King Hsss had been locked in the Void at the end of the war. In a ruse to free his King, Khan joined forces with Skeletor and, with the help of Evil-Lyn, they acquired Zodak’s staff, the key to freeing his Snake Men brethren. Together he and Evil-Lyn opened the Snake Pit portal releasing Hsss and his ageless army, returning their terror to Eternia. Khan went on to loyally serve Hsss, controlling his prey with his evil hypnotic mist!

And Draego-Man is the 30th Anniversary figure shipping in April: 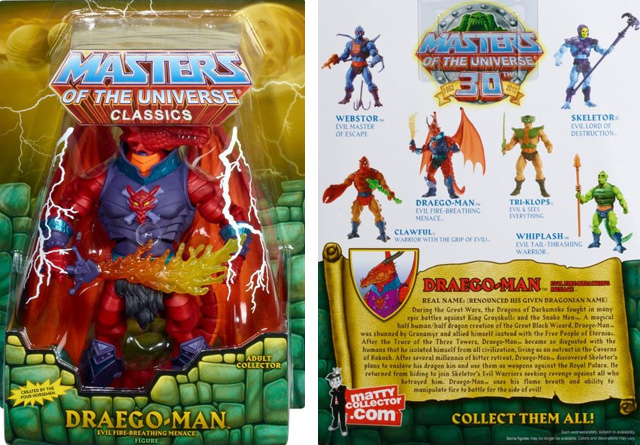 Draego-Man – Evil Fire-Breathing Menace, Real Name: (Renounced his given Dragonian Name)
During the Great Wars, the Dragons of Darksmoke fought in many epic battles against King Grayskull and the Snake Men. A magical half human/half dragon creation of the Great Black Wizard, Draego-Man was shunned by Granamyr and allied himself instead with the Free People of Eternia. After the truce of the Three Towers, Draego-Man became so disgusted with the humans that he isolated himself from all civilization, living as an outcast in the Caverns of Rakash. After several millennia of bitter retreat, Draego-Man discovered Skeletor’s plans to enslave his dragon kin and use them as weapons against the Royal Palace. He returned from hiding to join Skeletor’s Evil Warriors seeking revenge against all who betrayed him. Draego-Man uses his flame breath and ability to manipulate fire to battle for the side of evil!

Here are some notes about the figures from Mattel:

The first thing I couldn’t help but notice is that the folks at Mattel really need to figure a better way to take these photos. The packaging design always covers the heads a bit, but it’s hilarious on this pair because of how they were photographed. Draego-Man looks like he walked into a glass door. Which is understandable, he probably wasn’t paying attention to where he was going because he was trying to sort out that bio – I get the gist, he’s a mercenary that just really hates his dragon-half and wants to destroy anything associated with it as a form of self-annihilation (or something like that), but the way it’s worded leaves a bit to be desired. I think it’s just that you can’t really approach the notion of genocide from that angle – “Bob found out his Terry was about to kill millions of people and wanted to know where to sign up.” It just doesn’t make much sense…

Anyway, I’m excited about both of these figures. Kobra Khan has always been a favorite and his figure looks excellent. Draego-Man is exactly waht I’ve been asking for since MOTU Classics started, an original 4H addtion to the line. Lots of MOTU Classics goodness in our immediate future.

These bios have been added to our Sortable/Searchable Bio Page at MOTUClassics.Com. That page features an organized table of all the MOTU Classics bios with a nifty search feature. For example, if you type in “Zalesia”, the page will show you just the bios that mention the fabled city specifically. Go try it out!