Well, I hope everyone enjoyed Thor week. We had a lot of fun running down the Thor related Marvel Universe figures, but now it’s time to get back to toy business. So to ease us back into our normal routine I thought I’d start off the week with one last, very unofficial, Thor review: MOTU Classics PanTHOR!

Panthor was probably one of my favorite MOTU figures as a kid. He was this dark purple cat with glowing green eyes and real fur. What wasn’t to love? Plus, he didn’t need a saddle or helmet. Sure he served Skeletor, but he certainly wasn’t going to be anyone’s ride. Panthor’s way too cool and badass for that. Basically he’s the Samuel L. Jackson of the giant Eternian cats. 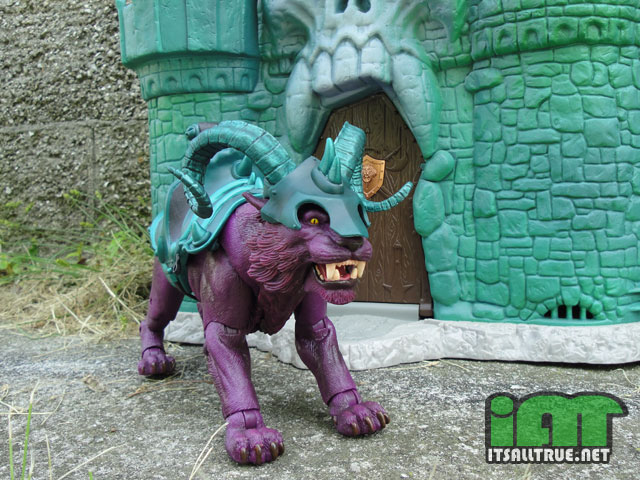 Now that Panthor’s been updated for the MOTU Classics line he’s been given a bio to explain his origin. Interestingly, Keldor saved cub Panthor similar to how Adam had saved Cringer as a cub. (Remember kids, if you’re ever on Eternia, the first thing you need to do is rescue a baby cat. He will be your loyal companion forever.) I don’t mind the similarities so much, but that makes Panthor about twenty years older than Cringer. No wonder he’s always laying around and getting annoyed when people disturb him. Plus, he doesn’t even have magical powers. I guess that explains why he and Battle Cat never got into more fights on the original show.

Like the original Battle Cat/Panthor, these new Classics versions are basically the same figure. That’s just something you get used to as a MOTU fan. And I don’t really mind it that much in this case because, realistically, giant cats are mostly similar in real life. Also, I always saw the reuse of vehicles and weapons as a form of proliferation and deterrence on Eternia. The good guys get a falcon, so the bad guys get a purple falcon and a mechanical horse. Then the good guys add a mechanical horse to their arsenal along with a guy with a big fist. The villain’s response: a guy with a giant karate chopping hand. Before you know it both sides are being carried to the battlefield in a giant reanimated dinosaur skeleton. 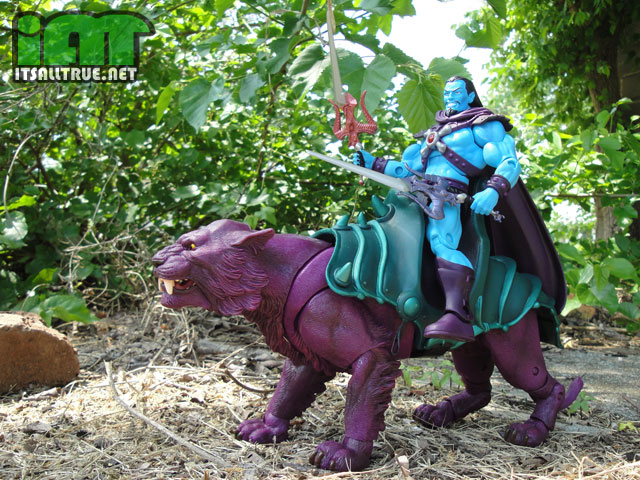 The one new piece that was added to the Panthor body is his upper head. Where Battle Cat has a rounder head with much more scruffy cheek fur, Panthor’s head is narrower and his cheek fur goes back more like it’s been combed. Also, Panthor’s ears are turned back, making them appear like horns or the top of an owl’s head. (If you own a cat then you’ve definitely seen this annoyed look before.) Meanwhile, Battle Cat is seriously pissed with his ears laying flat back on his head. I’m really happy with the work the Horsemen put into this new head and its similarity to the original paintings. 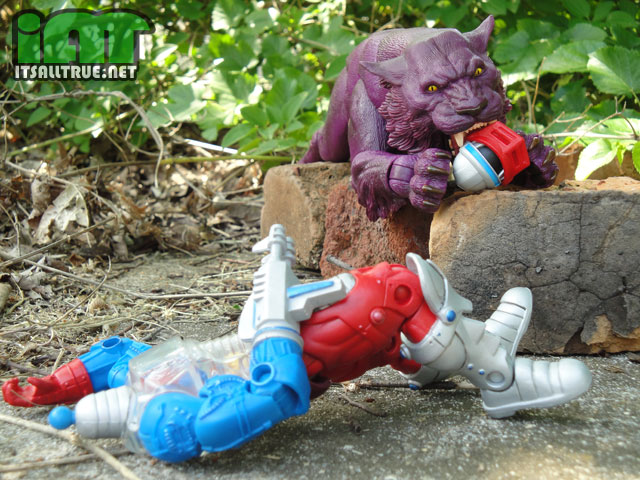 Panthor’s paint is pretty simple. The entire body is molded in that deep purple color. Interestingly, the combination of the hard plastic and dark colors gives his fur a sheen that isn’t as visible on Battle Cat. There are also these much darker, almost black, washes that highlight the textures in his muscle and longer fur nicely. For some reason the paint used on Panthor’s teeth is much thicker than that used on Battle Cat. This gives them much less definition. Also, they’re tinted a slight purple. I’m not sure if that was done on purpose or not, but it makes them look odd in my opinion. I do like that Panthor’s claws are a shiny brown and that they gave him black pads on the bottoms of his feet. Continue to Page Enchantress…