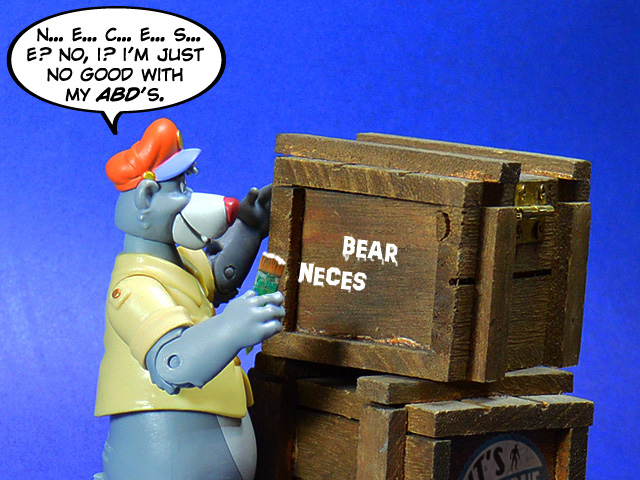 Baloo’s sculpt is not quite as on model as Scrooge, but is still a great visual representation for the character. It’s a clean sculpt overall and it’s grown on me the more I’ve photographed it. The head sculpt sells it, but one of the parts I liked most was using the shirt to completely hide the waist articulation.

Articulation for Baloo is like Scrooge’s – the ball-jointed neck & shoulders, hinged elbows, swivel waist, and swivel legs, now in the form of a v-crotch for Papa Bear here. The v-crotch is giving me some Playmates flashbacks, but it works to simulate some walking poses and allows the figure to be rebalanced when standing in various poses, including a kind of Bare Necessities dance.

The paint is again crisp, but much less is used here than on Scrooge, or it at least seems like it. Baloo also goes without any accessories, but that’s okay. The one accessory I wish he had, the Sea Duck, is probably a little too big for the package.

I feel like I’m rushing through this one. I’m a little out of practice here, but Baloo a nice addition to this fledging Disney line and I look forward to rounding out the cast in future waves.

I’ll be looking at the various Disney Afternoon figures aLL week. Baloo and the other figures are available for pre-order at both BigBadToyStore and Entertainment Earth. Look for the figures to be in-stock in November.

**Thanks again to the folks at Funko for providing this figure to IAT for this review!**