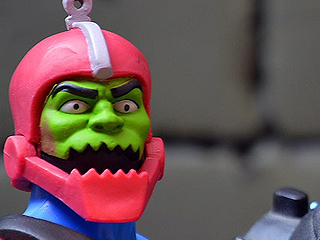 The arm, the key part of any Trap Jaw figure, is well done. It’s simple & clean, but that’s perfect. The attachments (his only accessories) all crack me up – the fly swatter, the energy bow, and the Filmation version of his rifle arm. They all swap out easily for one another and appear to be universal with previous pieces. The only weird thing is that I keep trying to bend that arm at the elbow and there’s no joint there, damn it!

Articulation is a little better than the Classics figures (minus that elbow joint on his arm). The ball neck has decent range as do the ball shoulders & hip, the hinge elbows & knees, and the swivels at the biceps, waist, and thighs. The Filmation body has a couple goodies though with the ball wrists and the much improved rocker ankles. Both of these joints really open the poses and their addition is much appreciated.

The paint is simpler on these Filmation figures, but what’s here is mostly well done. The only issues I had on mine were at the edges of the face. I guess the red highlights on the cheeks are supposed to be there, but the edge of paint is rough in spots. The eyes & brows are sharp though and the colors on the body match up well despite some being paint and others molded.

Overall, I know this figure is more fun than I feel like is. He was fun to photograph and he looks great. The MOTU Classics formula is still working – my time away has just dampened my enthusiasm a bit and the lack of news at Mattel has really taken a toll. These Filmation figures could be a great thing, but not if we only have He-Man, Skelly, & 3 of his henchmen. That really struck me when I put Mer-Man into one of the pictures. I’d love to see him done this way, in Filmation style. Maybe that’s the secret for Trap Jaw. I can’t get as excited because I don’t love him to start with. A fellow collector who hated on the idea of these sounded like a Pod Person when He-Man arrived earlier this year. He was converted. That’s a good sign for Mattel as long as they keep churning these puppies out.

For all our MOTU reviews, check out our
MOTU Classics Collector’s Guide.