Another convention has come & gone and that means it’s time for a little Armchair Coverage here at IAT! I was away this weekend, but I came home & dived in to the news, taking some notes along the way. Some lines had big news while others seemingly forgot there was a con on this weekend. 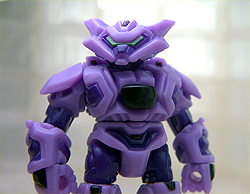 One of the things I was looking forward to for this convention was seeing the new items from Onell that were to debut at NYCC including the purple Armorvor pictured to the right and two new colorways. It took a little why to find out exactly what they were, but images were posted in this thread at October Toys showing a cool grey colorway as well as GITD. Both of those and a few other cool items should be available at Onell later this week.

The Four Horsemen were also in attendance with their own exclusive, the Beta Phase version of this year’s figures: Orbitron, Gemini, & Cyclops (these will be available at StoreHorsemen soon), but what stole the show for OSM fans was none other than the Man from Earth, no, not that other guy – Jack Asteroid! The name may be too clever for its own good, but the new human head and helmet (shared with Terra Firma) atop the basic Metamorpho body looks fantastic. You can see them in galleries at ToyArk, ToyNewsI, & Cool Toy Review. While you’re checking out the OSM, don’t forget to salivate over the images of the Gothitropolis Raven & his Cardinal companion. No word yet on their release. Also of note, StoreHorsemen is having a huge sale over their way. Now’s a great time to jump on board with some 50% off Outer Space Men or to pick up some amazing Gothitropolis figures at only $15 each!

Not to be outdone, OMFG also had a Series 1 Exclusive at NYCC: “Stealth”. Check out this this Pixel-Dan Video review of this color-changing (black to clear) set.

Finally, I don’t follow ThreeA much myself, but both ToyArk & Action Figure Pics stopped by their booth and got some great shots.

Mattel didn’t have a DC Panel at NYCC, so collectors were treated to two Club Infinite Earths reveals right out of the gate: Captain Marvel, Junior & the Red Hood (Day One Pics at ToyArk & AFP). Junior is my preferred of the two as that’s a pretty recent, short-lived costume for the Red Hood (appearing in Batman, Incorporated for a few issues just before the reboot), but the Red Hood still looks a like a great figure that I won’t mind having in my collection. Not too long after, an unpainted Huntress (AFP, Fwoosh) was added to the booth along with a basically ignored “No Photography” sign. For Huntress, I was pretty evenly split between what costume her figure would come in – the classics E-2, the Morrison JLA era, or the more recent Jim Lee design. It appears to be the more recent Jim Lee design sans the midriff and I’m fine with that, but it doesn’t diminish my wanting the other two someday (though the some days seem rather numbered anymore, don’t they?) 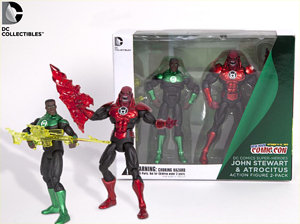 On the Mattel front, we also got our first look at two more Club Watchmen Figures: Silk Spectre (via AFP) & Nite-Owl (via Fwoosh). I’m a little concerned on how much movement I can get out of Nite-Owl there, but the pair looks good. Though I must admit that seeing the classic Nite-Owl realized as a figure kinda makes me want to go track down the DC Direct film version. Hrm.

DC Collectibles had their own exclusive for the show, another of their 3 3/4″ Green Lantern 2pks, featuring John Stewart & Atrocitus (via AFI). I must admit I’m tempted by the line overall, but not enough to pick up either of the 2pks yet. DC Collectibles more or less lost me after the new 52, but I know they still have plenty of fans out there. ToyArk, AFP, AFI, & CTR have pics of the booth if you’re interested. I will say the Frank Miller Superman statue is rather hilarious…

Some other DC merchandise shown at NYCC included several items from Kotobukiya (via ToyArk), Play Arts Kai (via ToyArk),a sweet Nightwing Prop Replica (via TNI) and this Dark Knight Rises Movie Master 3pk (via AFI). Oh also, if that new evergreen Batman line from Mattel has caught you fancy check these galleries from AFI & TNI 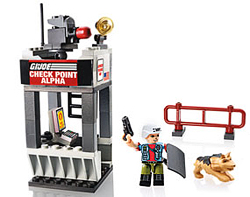 I haven’t talked about it much here, but the clearance prices and TRU BOGO on the Transformers Kre-O has made me a quick addict for the little guys. When they came out last year, I kinda sorta scoffed at the notion. After picking up a few, I found the brick quality was top notch and that the having the little Kreon drive around their vehicle modes is the exact kind of fun I’m usually looking for in good toys.

And now I can have Joes piloting those Transformers as well as their own iconic vehicles? My wallet has headed for the hills. I’m mostly stoked for the blind-bagged single Kreons so far Quick Kick, the Alley Viper, and a classic Adventure Team Talking Commander (awesome!), but some sets like the Checkpoint Alpha & Dragonfly are pretty sweet – and the prospect for some really classic vehicles in the future has me excited to see where this line goes. Check out Hiss Tank for pics from the Hasbro Preview Party & the Hasbro Official Images.

I’d also be remiss if I didn’t mention there wil be Star Trek Kre-O’s (via ToyArk) too. Just imagine Captain Kirk & Cobra Commander fighting on the back of Optimus Prime’s trailer… 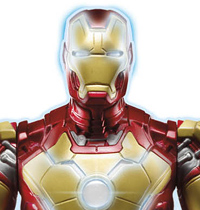 Like DC, I believe all or our Marvel toy news came from booth reveals as there was no actual panel for the toys (what’s that signaling?). Most everything from Hasbro was shown during the Preview Party (via AFI) including the first Iron Man 3 figure (via ToyArk) and Marvel Legends of Hope as Phoenix, a new Black Panther, and a new Hawkeye. It didn’t take long for the “we already have these characters” complaints to roll out, but I much prefer the new Panther and this Hawkeye looks like a better figure and isn’t pulling $50+ on eBay. I do wish Marvel Legends was a little more expansive in terms of character selection, but many of the originals came out 5+ years ago (& under a different company), so I can see why Hasbro is ready to revisit them.

If there were any Marvel Universe figures shown, can someone point them out to me? I sure didn’t see any…

For other Marvel News, ToyArk has galleries for Kotobuyika and Diamond Select including Minimates .