Amid the excitement over the possibility of the DKR Batman utilizing a MOTUC buck, I was privately getting worried that we were setting ourselves up. Unable to determine scale, I thought we might just be looking at a new “chunky” DC buck. I’m happy to report that my concerns were unfounded.

Click Her to Jump Directly to the Update
When asked by Poe Ghostal on Twitter (you follow Poe Ghostal, right?), the Four Horsemen confirmed (you follow the 4H, right?) that the upcoming Dark Knight Returns is indeed built using parts of a MOTUC buck:


“Yes and no. Parts of him [DKR Batman] are MotU re-use and some are not.”

Sweet! Judging from the one pic we’ve seen, it looks like the re-use is limited from the shoulders to the elbows, the hands, and the hips to the upper calves (this is why they answered “yes and no” to Poe’s question). That means this is yet another example of the significant amount of new tooling going into the Unlimited lines very quickly. I have high hopes that a few more classic (but high profile) characters can leak out through retail and get some serious love from Mattel & the 4H. 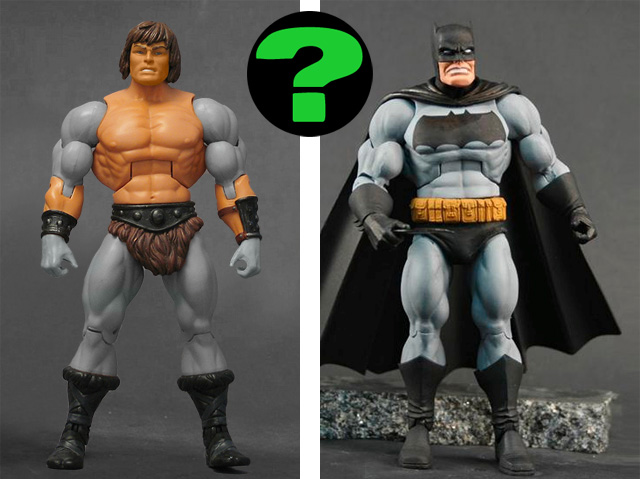 While I’m overjoyed with this new Batman (and already licking my chops at the prospect of a companion DKR Superman figure), some collectors have expressed concern over the scale. With DKR Bats sharing upper arms and upper legs of a MOTUC figure, he’ll easily be topping out closer to 7″ than 6″ like the figures that have been populating our DC shelves for the last five years. The 4H addressed this as well:

“Don’t worry about the height. He looks awesome. Take Cornboy’s word for it.”

“In Cornboy We Trust”, indeed. The figure looks pretty sharp in the one picture and it’s an interesting choice that has morphed into a must buy for me. I know I’m not going to have a scale issue as he’s destined to hang out with my MOTU figures. As for others, I don’t know. I don’t think I’d plop a DKR Bats down in the middle of my DCUCs anyway, so I don’t imagine it will be a major issue, but for some folks the scale will make it an easy pass. 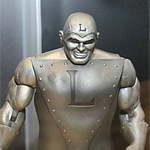 Finally, one last point to address as some collectors are unsure about how there can suddenly be buck sharing between the two lines. Mattel’s typical stance is that the buck body is proprietary to the licensor. Some had speculated that some circumstance may have changed to allow for this to happen, but the answer to how this figure can come about is actually much simpler.

It was again Poe Ghostal who pointed it out on twitter (and the 4H later confirmed) that Mattel can take a MOTUC buck and reuse it in this instance because they are the MOTU licensor. It is the DC bucks that are proprietary to DC and can therefore not be used in MOTUC to make MO2K Prince Adam, Inspector Darkney, or other figures in the MOTU world that could use a slimmer buck. Basically, it’s a one-way street. Things can come out of the Mattel-owned MOTUC, but licensed tooling cannot go into MOTUC.

Some have already asked why this solution wasn’t thought of in time for the upcoming Metal Man, Lead, and I think that’s a valid question for Toy Guru to address. Personally, I have a feeling that Lead’s going to look great with the Metal Men on the Darkseid buck, but it isn’t comic-accurate and now that we know a more comic-accurate solution did exist, it may change the minds of those of us who were initially more accepting of the oversized Lead.

Anyway, with the newest retail reveals being 75% Batman. And, in turn, making the initial Unlimited offerings 50% Batman overall, we may as well embrace things and start proclaiming what versions of Batman we want to see. More artist specific Batmen? More one-off costumes? I’m still angling for that Zebra Batman personally. But there’s the old Rainbow Batmen, Future Damien (666) Batman, and of course, Zurr-En-Arrh begs the question, where in the heck is my Dick Grayson Batman?

While we got early word about the re-use from the 4H’s Twitter account, one thing I’d been waiting on is for some Ask Matty answers at the Mattycollector forums. Now, technically, this Dark Knight Returns Batman falls under the province of the triumvirate of folks that oversee the retail line and comprise “Matty Justice League”. We’ve had no word from him yet, but many collectors took to the online forum to ask Toy Guru about the figure. He answered three times:

I actually checked with the DC team. This is not a Batman fig using the MOTU buck. It is in “scale” to MOTUC (in order to create that unique one time Dark Knight Returns look) but the only MOTUC part it uses is the shoulders. All other parts are brand new. We were happy to loan the use of the shoulders as a one time help for the DC team, but as always, MOTU classics parts will only be used on MOTUC toys.

The only parts this Batman uses from MOTUC is the shoulders. Otherwise it is a 100% new figure. Normally we don’t share parts from MOTU but we made a one time exception due to only using the shoulders.

And then this one after Toy Guru was linked to this very article:

Design has told me it is just the shoulders that were lent but I haven’t seen the fig itself to inspect it.

I’ve been thinking about it since TG posted these earlier and it’s hard for me to wrap my head around. Heck, it appears difficult for Toy Guru to wrap his head around after seeing the comparison pics. So far, the pieces look so much alike that it seems unlikely they aren’t the same. It seems unlike Mattel to waste tooling dollars so frivolously. It seems unlike Mattel to develop a buck that they can’t reuse because it has no shoulders after this “one-time exception” is over. And screw this one-time exception! Where’s Superman? Where’s the Mutant Leader? The buck shouldn’t stop here, so to speak.

There are plenty of possibilities though. Maybe the pieces will look completely different close-up. Maybe Mattel really did make new tools for the Batman figure except for the costly insert-molded shoulders? Maybe the 4H used similar pieces during the design phase that were still retooled by Mattel for whatever reason? The DC Movie Masters suit body and the DCUC suit body are the same sculpt (wth the lower legs reversed), but required completely different tooling based on size. Anything goes.

Truth is, I don’t care. Just give me the Batman already, Mattel.